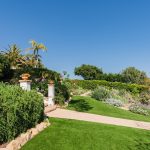 Due to multi-year droughts and diminishing groundwater, water conversation is a high priority in counties and cities throughout California. Even though residential usage has fallen significantly for years due to pricing incentives and water-saving technologies such as low-flow toilets and shower heads, per capita use averages 146 gallons per day, roughly half of typical consumption levels in the 1980s.

Also motivating consumers to reduce water usage is the skyrocketing cost. In Los Angeles between 2010 and 2017 water rates shot up 71% and went up 119% to 127% higher in San Francisco. Increases that noticeable put pressure on household budgets. Here are some reasons an increasing percentage of homeowners and businesses are removing lawns and going “evergreen” with EcoLawn:

Save Thousands on Water and Gardening Expenses

Roughly 30% of the average water bill is due to watering grass and other landscaping uses. That really adds up when you realize that to deliver just an inch of water to a lawn it takes over half-a-gallon per square foot (0.623 gallon). For every 10 foot by 10 foot area, 62 gallons are required, or 6,230 gallons for a 100 foot by 100 foot yard. Installing EcoLawn prevents wasting thousands of gallons of water, eliminates yard work, and avoids the purchase of costly fertilizers, pesticides, and other supplies necessary for maintaining appearance. After investing in an EcoLawn, most homeowners recoup their outlay within one to three years by saving thousands on their water bill.

All EcoLawn grasses are designed to resist mold, prevent bacterial growth, and of course don’t provide a breeding ground for dandelions and other weeds. Grass pollen is one of the most common causes of allergies, also known as hay fever. After switching to EcoLawn, many of our customers say they are much less likely to experience symptoms such as runny nose, watery eyes, and sneezing while outdoors.

Protect Your Family and Pets from Toxins

The chemicals contained in common lawncare products pose a serious health threat to your family and neighbors. An estimated 100 million pounds of pesticides are introduced into the environment by homeowners each year. Research has proven that these chemicals remain dangerous for months, even when dry, and do not stay where they are applied but contaminate indoor air and surfaces. Not surprisingly, studies by the U.S. Center for Disease Control and Prevention (CDC) have detected pesticides in 100% of the adults and children tested, with an average of 13 out of 23 of the most common pesticides turning up in blood and urine.

Be Kind to Mother Earth

The negative environmental impact of lawns go far beyond the toxic chemicals used to maintain them. Multiple studies have shown that grass continually releases significant quantities of harmful nitrous oxide. Most grasses used for landscape are not native to the area they are planted. Here in the West, grasses well adapted to cooler, wetter climate zones such as the Pacific Northwest and Eastern Seaboard are ill-equipped for the long hours of intense sunlight and low humidity characteristic of our coastal plains. In fact, scientists say that the only areas in the nation where lawns could be considered truly “natural” and therefore not require irrigation or fertilizer, were a few areas of the Northeast and the Great Plains.

Keep Fertilizers Out of Our Groundwater and the Ocean

In the quest for the picture perfect green yard, many people unknowingly oversaturate the lawn with phosphorus and nitrogen. When there is already abundant nutrients in the soil, much of these fertilizers are washed away by watering and become environmentally damaging runoff. Once in the sewage system, creeks, and ultimately the ocean, phosphorus acts as a superfood for algae. Runaway algae growth or algae blooms drive the pH balance to unhealthy acidic levels and rob water of sufficient oxygen to support marine life. This affects the ocean’s entire food chain, from microorganisms to fish, sharks, and mammals such as harbor seals, sea lions, dolphins, and whales.

No More Dirt in the House or Muddy Shoes!

During rainy season or after watering, lawns produce mud and errant blades which inevitably are tracked indoors on shoes and pets. Dry, windy days stir up dust and soil particles from lawns and bare earthen areas, which can contain bacteria, pollen, mold spores, insect parts, rodent droppings, heavy metals, and lawncare chemicals. Once indoors, these toxins are trapped and contribute to poor indoor air quality (IAQ) which the U.S. Environmental Protection Agency says is often 2 to 5 times more polluted than outdoor air. Why increase the amount of effort it takes to keep your valuable carpets, tiles, and furniture clean when you can eliminate virtually all of the debris around your home?

By creating lush, verdant areas with an inviting, fresh look anywhere you choose, EcoLawn instantly opens up a world of creative landscape options for your home or business. Artificial turf is unbeatable for creating an oasis of eye-catching beauty in front and backyards, side yards, pool decks, patios, pet runs, putting greens, and play areas. Just a few dozen linear feet can provide the perfect finishing touch around walkways and driveways. Without the need to water, mow, or ever reseed, EcoLawn can brighten up underutilized or irregularly-shaped portions of your property which would otherwise be impossible to improve with high maintenance grass. Your investment in an EcoLawn will also pay big dividends at sale time by drastically enhancing “curb appeal”.

Rebates Can Help Pay for Your New EcoLawn

Although the State of California’s Department of Water Resources (DWR) is currently not accepting new applications for the ‘Save Our Water’ Turf Replacement program which pays up to $2 per square foot of artificial turf, the City of Santa Barbara offers a similar rebate. Homeowners or businesses can receive up to 50% of the cost of choosing permeable landscape such as EcoLawn under the Smart Landscape Rebate. Following pre-inspection and approval, the program pays a one-time rebate of up to $1,000 for single family homes and up to $2,000 for irrigated areas serving commercial, multi-family, and HOAs, or up to $4,000 per site.