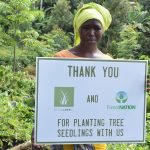 Planting Trees for the Planet

EcoLawn, the leading landscaper on the Central Coast providing homeowners and businesses with environmentally-friendly, maintenance-free lawn and hardscape solutions, is pleased to announce it has planted over 6,000 trees overseas in partnership with ForestNation, a global reforestation organization.

Owners of EcoLawn Santa Barbara, Beau Schmidt and Chloe Kirk say their goal is to offset the company’s carbon footprint by planting a tree for every 10 square feet of turf installed locally in support of the United Nations Environment Program’s Trillion Tree Campaign. Since its founding in 2014, EcoLawn has helped Santa Barbara homeowners and businesses reduce their use of water by as much as 30%, saving approximately 8 million gallons of water in the County of Santa Barbara annually, by removing over 450,000 square feet of traditional, unsustainable grass landscape.

“When we founded EcoLawn in the middle of the last drought, one of the most intense in California history, we made a commitment to the preservation and restoration of our beautiful yet fragile Central Coast environment,” Mr. Schmidt states. “After learning that the state had lost over 100 million trees to drought from 2011 to 2016, it occurred to us that by partnering with ForestNation, we could give back by helping reforest regions around the world such as Tanzania where our efforts are currently concentrated. In doing so we’re empowering farmers and communities while working toward carbon neutrality for EcoLawn.”

Both Mr. Schmidt and Ms. Kirk say it was the practicality of the ForestNation program which prompted them to get involved. Each sapling is produced in the village by paid nursery staff trained to germinate it from seed. When grown to sufficient size in the nursery, they’re planted in a predetermined location. The species of trees are carefully selected to have maximum beneficial effects on the environment and the lives of the people where they are shipped. Among the native trees currently arriving in Tanzania by the thousands are avocado, pear, loquats, and a variety of lesser known species native to the East African nation.

The over 6,000 trees planted to date by EcoLawn are in the Lushoto district of the Usambara Mountains, an area once completely shrouded in virgin tropical rainforest and home to a highly biodiverse ecosystem. Aerial surveys show that 70% of the original forest cover of the West and East Usambaras has been lost due to widespread logging by foreign companies which began in the 1950s.

To check in on the number of seedlings now growing in the rainforest, Mr. Schmidt and Ms. Kirk go online to their ForestNation Campaign and view reports of the positive impact the ever-increasing population of trees is having on the communities across the Lushoto region.

“We’re thrilled that our involvement in this worthwhile effort is providing employment and helping restore the spectacular rainforests at the same time,” Ms. Kirk comments. “The tree planting work provided by ForestNation pays exceptionally well and empowers the farmers to regain their traditional way of life. All materials necessary for this ambitious project are provided at no cost and ForestNation biologists donate their time to advise on strategic planting areas and forest management.”

According to the Global Hunger Index, food insecurity is rampant in Tanzania with many living in poverty. Historically, the inhabitants of Lushoto are subsistence farmers completely reliant on the health of the forest which provides them with timber, fuel, fruit, and medicinal extracts. ForestNation officials say roughly 80% of the nursery workers in the Lushoto region are women who have previously been excluded from having an active role in the economy of Tanzania.

“Just as we approach every landscape project from an environmental perspective to minimize waste and achieve equilibrium with the natural surroundings, we hope our involvement with ForestNation will encourage others in Santa Barbara County to take similar action to create a more sustainable future,” Mr. Schmidt adds.

ForestNation is a social business with the mission to help humanity thrive by re-connecting us to nature and to each other. The Plant a Tree program combines commercial, social, and environmental goals to empower companies and organizations to fulfill their own missions while reforesting Mother Earth and creating sustainable livelihoods. In its partnership with EcoLawn, every tree which is planted for each 10 square feet of turf installed locally is registered with the Trillion Tree Campaign in support of the United Nations Environment Program (UNEP) global reforestation goals.